When Sandra Hansen became an Eco artist in 2014 she began painting about environmental issues. She then moved to creating art from plastic bags.  Sandra wanted to become more environmentally sound in her art practice. In 2015 she fell in love with the magic of creating something translucent from leaves and bark. Handmade paper is completely environmentally sound and can be absolutely gorgeous. Its rich texture and its delicate gauzy effects are amazing. Paper has the ability to bring alive the horrendous problems of water pollution simply by putting plastic bags into the pulp. Paper is exceedingly versital as well and can be used in many multimedia objects and hangings. 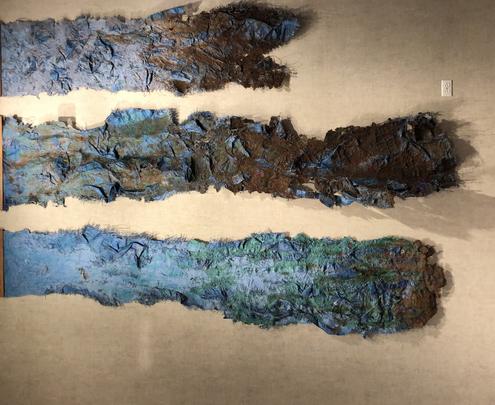 The Blue Mountains Botanic Garden in Mt Tomah, Australia is tasked with heavily guarding and propagating the Wollemi pine trees.

The "Timeline" reaches into history with some Wollemi pine leaf paper, to our modern day, with its plastics. The rivers and waters of the world all have chemical and material pollution. The "Timeline" records the history of pollution in the water.

At the Bilpin International Ground for Creative Initiatives (BigCi), an artist residency in Bilpin Australia, I had plenty of space to create large art. Timeline was created from handmade paper, blue jeans, found objects and Wollemi (Woe' le my) Pine paper.

The Wollemi pine tree was known of only through fossils. It was thought to have become extinct 93 million years ago. In 1996 David Noble was rappelling in the Wollemi National Forest when he found some unusual trees. These were discovered to be Wollemi pine trees.