When Sandra Hansen became an Eco artist in 2014 she fell in love with the magic of creating something translucent from leaves and bark. Handmade paper is completely environmentally sound and can be absolutely gorgeous. Its rich texture and its delicate gauzy effects are completely amazing. Paper has the ability to bring alive the horrendous problems of water pollution simply by putting plastic bags into the pulp. Paper is exceedingly versitile as well and can be used in many multimedia objects and hangings. The beauty of the paper shows us the beauty of each of the objects that we love until they decay into pollution.

Embroidered onto the sari are red, yellow and white threads used in many religious rituals. Red threads are used in wedding ceremonies to tie the bride and groom together at the wrist, to strengthen bonds between siblings, friends and other relatives as well as strangers. Occasionally the threads are sent to enemies to create a ‘universal oneness.’ In another ritual women wind red, yellow and white threads 108 times around religiously significant trees. These represent the fragility of life, as well as love, trust, and faith. A single thread may be weak, but, when it is wound 108 times around the trunk, it becomes strong. I have included these threads to speak of that universal oneness between myself and a country that is extremely different from mine, yet fascinates and compels me to return.

Moving across the sari are the seemingly chaotic streets with an endless stream of auto and bicycle rickshaws, cars, trucks, bicycles, motorcycles, and people moving through a current of cows, goats, and dogs.  The jumbled street scene is a mixture of my own memories, colaged together showing the messy vitality of life in Varanasi.

On the left side of the sari is a scene at Assi Ghat in Varanasi, India. A number of men and women are worshiping at a small temple under a sacred tree. On the far right (shown in the last photograph below) is Ravi Das Gate.  This marks the path I took regularly from the school I worked at to Assi Ghat where I painted and enjoyed the life of the city. 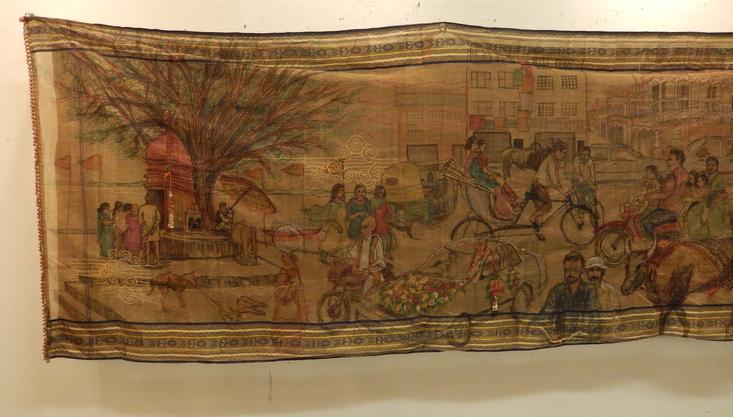 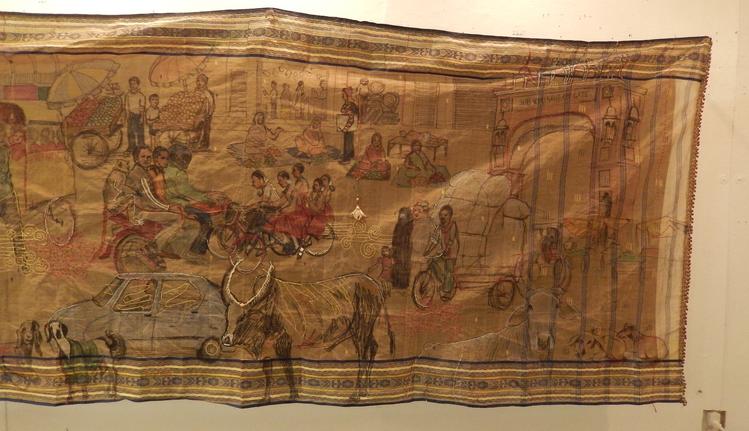 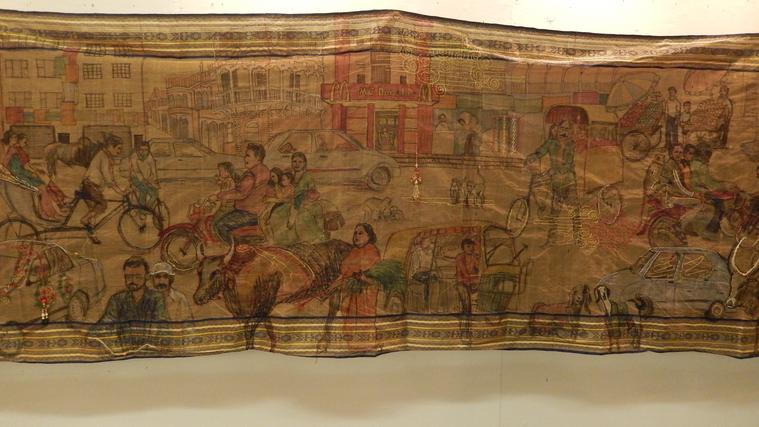 The sari is the clothing that most adult Indian women wear.  It is wrapped around the body as an unstitched garment.  Each region of the country developed a unique style of weaving embroidery, folding and draping the cloth.  Saries are imbued with clues about caste, region, occupation, religion, and economic class of the women who wear it. This sari was created from a starched, brand new, handloom, cotton sari worn by lower class women from a time before the advent of the wrinkle free  polyester saris .